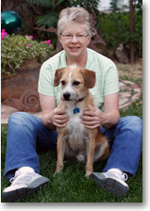 In October 2009 I opened my home and my heart to a little rescue terrier Mix named Chance. He was the third in a succession of 3 dogs who have shared my home with me, and I had been lulled into complacency by my two previous dogs who were the easiest dogs in the world to share my home with. I had no real clue about what was to unfold.

I had seen Chance’s picture on the PetFinders website and he was SO cute—in fact, Movie-Star cute—that he grabbed my heart. On the positive side, Chance was smart and funny, he was house broken and knew some basic commands (which he chose to respond to when he wanted to), and he didn’t chew on anything but the toys I gave him. On the down side, he was highly reactive with people and other dogs and it was apparent that he had an attitude as big as Mount Rushmore. Though he had no bite history, I was unable to have people come to my house because of his aggressive behavior. He basically wouldn’t let anyone in the door! And because he was so reactive, taking him for walks was a real nightmare. He quickly assumed control of me and my house (and my life).

Ana came to our rescue! After Ana’s initial assessment of Chance and his behavior, I quickly enrolled him in an in-home training program of behavior modification and we began our journey back to the real world. Ana’s rewards-based training, based on positive reinforcement of good behavior, is just what Chance and I needed! Ana has helped me understand the intricacies of body language (both mine and Chance’s), and she has shown me how to anticipate situations before they occur and how to defuse some of Chance’s reactions before they escalate out of control. My vet prescribed an anti-anxiety medication for Chance that takes the edge off but still allows him to remain alert and able to learn and doesn’t leave him drugged. Ana also provided me with the tools to convince Chance that I am in charge and that he can step back and relinquish control to me. I am fully aware now of how much exercise Chance needs to allow him to burn off some of that terrier energy—Chance and I walk between 2–4 miles daily, and Chance currently also runs regularly with Travis in the Jog the Dog side of Grace Dog Training & Behavior. Chance is beginning to make some doggy friends and is becoming less reactive with people. He will always be a work in progress, but our life together is much more manageable these days. A big THANK YOU goes to Grace Dog Training & Behavior for being a real lifeline for Chance and me.

We know that a mis-behaving dog can be overwhelming. Tell us your story and we'll take care of the rest.

Tell Us Your Story