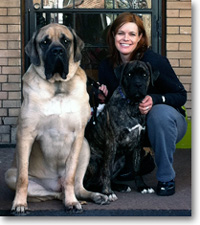 Ana came into my life because of my second Mastiff, Booker. I adopted him from a rescue with no clue to his background. But seriously why would a cute 9 month-old dog have issues, right?

I was out of my league. His first owners tied him up in a yard, starving and beating him for fighting. I’m not sure how he ended up in a shelter in Aurora but by some grace he was not put down and ended up at Blue Lion Rescue, where I found him. He snapped at me once and we’ve never had a problem since, but he was fearful around strangers. This concerned me. While a small badly behaving dog is labeled “cute” or “funny”, the same behaviour in a big dog is labeled aggressive.

So Ana came to us. After an eval we started classes, which were working but not as well as I had hoped. At one point I had a meltdown, and Ana, in her tough-but-loving approach told me I had to get my head in the game if I wanted to see success in Booker.

So I put my head in the game and gave him my best effort. It has reaped rewards beyond my imagination. While my first Mastiff, Chloe was as sweet as ever around people, she was a naughty dog whose manners were far from perfect. I realized this as Booker became the better behaved dog walking on a leash. He never steals food off the counter. While we’re still working on his fear of strangers, he now takes treats from Ana’s hand when she comes over!

Booker tuned out to be the biggest blessing in disguise. The day after Christmas 2008, Chloe became very ill. She ended up in the doggie ICU for 3 days. After 6 units of blood, 20 litres of fluid, IV and oral immunosuppressants, she still showed no improvement. Accepting that Chloe’s death was near and deciding to put her down was the hardest decision of my life. Coming home to Booker saved me. Funny thing is, he knew. He looked for her, but he knew she wasn’t coming back. Grieving with him was in itself the best therapy. Ana helped with that too.

He is still becoming an amazing dog. He is a well-mannered family member and an amazing companion. Ana has guided us in so many ways and provides solid, real life advice and solutions. She is the reason I still have Booker – and for the incredible bond we have.

Ana has a great sense with animals. She is patient, offers sound advice, and more often than not is correcting the human involved. She helps you understand what your dog sees and understands and has endless resources to supplement you. She makes sure you understand that your relationship with your dog is YOUR responsibility and success lies largely in your hands.

I’m looking forward to building my relationship with my next kid, Lucy, with Ana to guide us.

We know that a mis-behaving dog can be overwhelming. Tell us your story and we'll take care of the rest.

Tell Us Your Story